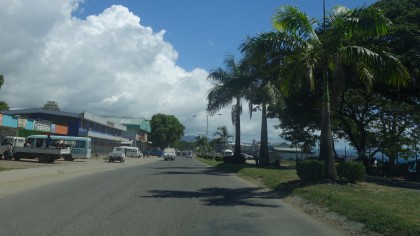 The Permanent Secretary of the Ministry of Infrastructure and Development Henry Murray says the deteriorating road in Honiara happens because it was originally designed not to cater for heavy
traffic congestion.

“The road that we have now was not designed for the amount of traffic that we currently have and it’s more than 25 years old and it cannot withstand the current loads hence we can see that it’s failing.”

He adds plans are in place for temporary repairs as MID awaits a major road improvement project secured for June this year.

“There are plans put in place by MID to maintain the roads now but on a temporary basis because we have already secured a contract project to upgrade the road which will commence in June, so any work done now will be only on temporary basis and we wouldn’t be able to do it as the public wants due to bad weather conditions we are experiencing throughout the year.”

Meanwhile, a local experienced road contractor claims, the main reason why Honiara roads have many potholes is because the Ministry of Infrastructure and Development, MID, award contracts to contractors who may have less expertise in road works.

He says if MID has road maintenance supervisors, they should oversee that road repair works are not sloppy.

Mr. Wasi says the Government does not want its money thrown into the ocean therefore, the Ministry of Infrastructure Development is mandated to oversee the contractors deliver to expectation.