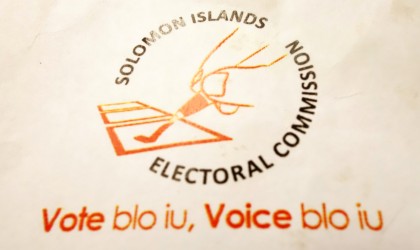 A concerned registered voter for Savo-Russell constituency says politicians and intending candidates are hijacking the new biometric voters registration system by bringing in people from other constituencies and provinces to register to vote in his constituency.

William Runa said such an act is hijacking the rights and freedoms of people in Savo and Russells who should choose their own leader.

Mr Runa told SIBC News that during registration yesterday, he witnessed four truckloads of people from West Guadalcanal were brought in to register under districts and communities in Savo and Russell.

“I myself have witnessed vehicle loads of people, and I can tell their registration numbers, and I know those who were in them are from West Guadalcanal, like from Takaboru, Visale, Vila and as far as Maravovo and Aruligo.”

The Savo-Russells voter also expressed concern that development funds allocated for his constituency will be ‘stolen’ by West Guadalcanal constituents under such an arrangement.

“We cannot take people from Guadalcanal and put them in Savo because they will out number the rights of Savo people and when it comes to the sharing of constituency funds, you’ll share it to two islands, which I see as different constituencies on Guadalcanal stealing from Savo and Russells constituency funds allocated mainly for the Savo-Russells people.”

Meanwhile, William Runa calls on people in Savo-Russells not to sell their ballot paper because he says their vote has the power to bring about the change they desire for their constituency.

Polling day for Central Honiara Constituency by-election 2020. South Choiseul by-election is scheduled to be held during the first quarter of this year. A confirmed ... Read More