SAPE Farm in north Guadalcanal will soon process and package cassava into frozen, grated and cassava flour.
The farm is 10 months in the making of a new cassava processing facility which is anticipated to be completed in the next two months.

Sape farm already has 200 hectares of registered land, and is currently farming cassava on its 40 hectares of land.
Sape Farm Managing director, Dr Paulson Bosawai Popora said the facility is the second phase of the supply chain of Sape farm. It is a key objective of the farm.
Dr Bosawai said the pack house is co-funded by the national government through the Ministry of Agriculture and Livestock (MAL) and the Sape Medical Clinic which is owned and operated by Dr Bosawai himself.
The facility should be completed and launch by July this year, and exports as well as domestic market is anticipated after that.

Dr Bosawai shared a story behind this facility when our news team visited his farm recently. 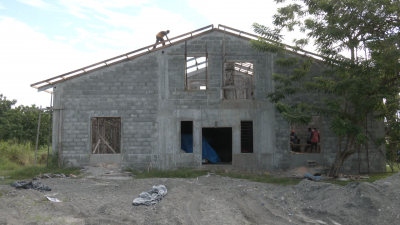 Two products will be processed in the second room and then transferred to the third room which will consist of a dewatering machine.
Dr Bosawai said another process will be done here to process very fine particles into cassava flour. The grated cassava will be dewatered and processed into cassava cakes.
These cassava cakes will then be put in a flash drier bay which uses heat exchange principle to dry cassava cakes into coarse flour and then will go through another machine called the hammer mill which will turn the cakes into cassava flour.
Clean tubers will be prepackaged and transferred in a sealing room, and then stored in blast freezers. The blast freezers are already onsite.
Dr Bosawai said 20 tonnes of frozen cassava can be done in one process. All package products that will exit the facility will be properly checked in the delivery office before going to the container.
He said the processes will be overseen by the Sape Farm manager and Milling manager, who also have offices in the upper floor of the building.

The building also consists of a meeting room where workers will be briefed each morning.

Health Standards and Compliance
Dr Bosawai adds, the facility will meet HACCP [Hazard Analysis Critical Control Point] standard and compliance when completed.
“The national government funds this HACCP standard, it costs around $1.3 million just for HACCP standard and compliance.”
HACCP compliance makes sure that all aspects of food storage and handling are conducted in a safe manner.
“For instance, water to wash cassava will have to go through a certain standard and treatment before we can use it to wash cassava.

“Of course it’s very important that we will meet health standards and compliance to produce healthy and safe food for people,” he told SIBC News during our interview.
He said by end of July they should launch the facility, and go on export as well as domestic market.

Advantage of facility
Dr Bosawai said the processing facility is a dream of Sape farm. This facility will produce three products, these are peeled frozen cassava tubers, grated cassava and cassava flour.
He pointed out that one of its advantages is to produce ready-made products.

“For example, those planning on making wedding parties can purchase ready-grated cassava for pudding or other food preparation.”
Dr Bosawai adds, another advantage of having such a facility is based on its economic returns.
“When you have big economic returns, you will also pay a bigger tax to the government. I think the huge advantage of having this is, not only benefit Sape farm but also for people living here as well as Guadalcanal Province,” he said.
The medical doctor and agriculture enthusiast said in 2019, the farm paid around $700,000 in tax and salaries. By doing this, Dr Bosawai believes they are contributing to the economy.
Sape farm has also funded school fees of primary and secondary school students of the area through the farm’s scholarship scheme.
Dr Bosawai acknowledged the national government to assist the farm quicker than expected.
SIBC News understands Sape farm received a government funding partnership of $2.7m in 2020. The Government also funded a brand new backhoe in February 2021 which costs $618,000.
Cassava is one of the most important root crops in the country.