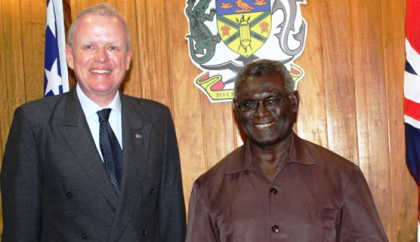 Solomon Islands is working on opening up a diplomatic mission in London.

A Government statement said Prime Minister Manasseh Sogavare revealed this when the new British High Commissioner to Solomon Islands, His Excellency Chris Trott paid a visit to him Wednesday this week.

He said Britain should have been the first country for Solomon Islands to open a diplomatic mission following independence in relation to their special relationship, dating back to Britain’s Protectorate administration over Solomon Islands.

Meanwhile, British High Commissioner Chris Trott said it would be fantastic if the country plans to open something permanent, adding they would be very pleased to see Solomon Islands open up a diplomatic mission in London.

His Excellency Trott also told Prime Minister Sogavare of his excitement to be posted in Honiara, reiterating that Britain’s permanent diplomatic presence in Solomon Islands is a manifestation of the strong relationship between the two countries.

Meanwhile, the statement said the new British High Commissioner had served in Africa in the past 10 years as ambassador in Dakar, Senegal and Consular General in Cape Town, South Africa.

Prior to his African postings, he served in Tokyo, Japan.

Prime Minister Sogavare also spoke on his government’s policy priorities upon the request of the British High Commissioner.

He said the policy agendas of the government are guided by the reasons behind the ethnic crisis and these boils down to the need for the decentralisation of development.

The Prime Minister said the first quarter of 2016 will see the DCC Government table legislation to establish Special Economic Zones in Solomon Islands in a bid to promote and ensure economic development across the country.