The Minister of Foreign Affairs and External Trade, Honourable Jeremiah Manele and State Councillor and Foreign Minister of the People’s Republic of China His Excellency Wang Yi, concluded successful bilateral talks and celebrated their close relations by formalizing a number of Development cooperation frameworks, arrangements and sub state relations that will see deeper economic engagement and closer people to people connection. 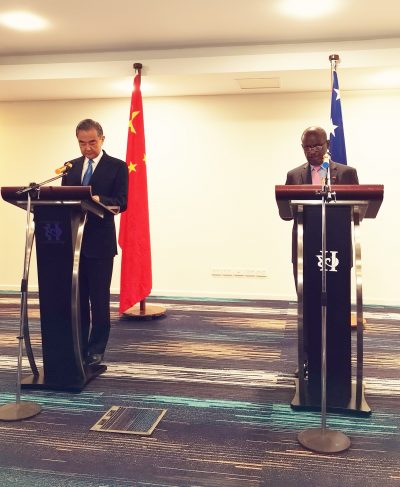 The two countries strengthened their commercial connection with a number of arrangements including the exchanged of letters on China’s non-reciprocal trade arrangements with Solomon Islands.

A visa waiver exemption Agreement was also signed to facilitate closer engagements and movement of diplomats, officials/service and Public Affairs passports holders in the case of China.

On the aviation front, the two states initialed a Civil Aviation Agreement. This will allow the aviation industry to do business with China and open up tourism and business market.

Memorandum of Understanding on Health Cooperation was signed between Solomon Islands Ministry of Health and Medical Services and the National Health Commission of the People’s Republic of China’s Ministry of Health following bilateral discussions between the two Foreign Ministers. Solomon Islands acknowledged the presence and valuable contribution of China’s medical team in the country as well as their ongoing COVID-19 support.

An MOU on the Cooperation between the Ministry of Environment, Climate Change, Disaster Management and Metrology of Solomon Islands and the Ministry of Emergency Management of the People’s Republic of China in the area of disaster risk reduction was also signed

The Ministries of Commerce of both countries today signed a Memorandum of Understanding on Deepening Blue Economy Cooperation which aimed at opening up cooperation on infrastructure, marine industries, energy amongst other sectors.

Regarding the 2023 Pacific Games facility, Solomon Islands welcomed China’s commitment to deliver the facilities on time and in good quality.

Solomon Islands welcome the offer by China to train Solomon Islands sports men and women as the country prepare to host the Pacific Games next year (2023).

The two Ministers acknowledged the relationship between Solomon Islands and China is one that is based on the principles of equality, mutual benefit and respect for each other’s sovereignty and remains firm in the fast-changing international system.

Prime Minister Manasseh Sogavare The $1.2 million fund from the People's Republic of China (PRC) is currently at the Central bank of Solomon Islands. Prime ... Read More