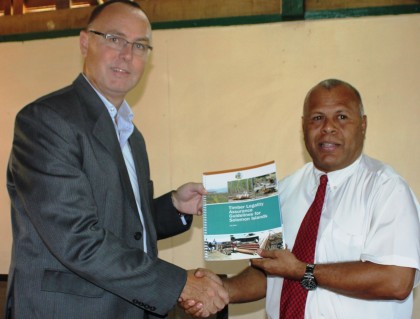 Solomon Islands is the first country in the world to receive approval to trade timber products to Australia under new timber legality guidelines.

The Ministry of Forestry and the Australian High Commission announced jointly today that Solomon Islands had received approval from Australia for country-specific guidelines used to verify legal origin of Solomon Islands sawn timber exported to Australia.

This will enable exports of Solomon Islands timber to Australia to meet new import requirements for timber, which are due to come into effect on 30 November of this year.

He said the new guidelines will help protect these exports and jobs.

In handing over copies of the guidelines the High Commissioner congratulated Solomon Islands for being the first country to have a country-specific guideline in place.

He noted that the Australian Government intended to use the guideline developed by Solomon Islands as an example in its negotiations with other trading partners.

International markets, such as the USA and European Union, now require that all imported wood products can be demonstrated to have been legally produced.

Australia has followed this market trend with implementation of similar requirements.

To address this market issue the Ministry has worked with the timber industry since June 2013 with technical assistance from PHAMA.

This work has resulted in the development and co-endorsement by the Australian and Solomon Islands Governments of a country specific guideline for Solomon Islands.

EU DIPLOMAT TO VANUATU AND SOLOMONS ADDS FIRST TO PORTFOLIO