Solomon Post is a Silver Sponsor for the 2023 Pacific Games

Solomon Islands Postal Cooperation known as Solomon Post is a Silver Sponsor of the 2023 Pacific Games.

Acting Chairperson of the Solomon Post Board James Apaniai announced this during a brief event this morning at the Games Organizing Committee (GOC) head office, in Honiara.

“It’s an honor and privilege to stand in front of you all as an acting Chairman of Solomon Post to be part of the Pacific Games through the Silver category sponsorship program.

“We are giving 2-million dollars.’’

“That’s the amount for the silver category sponsorship,’’ he said. 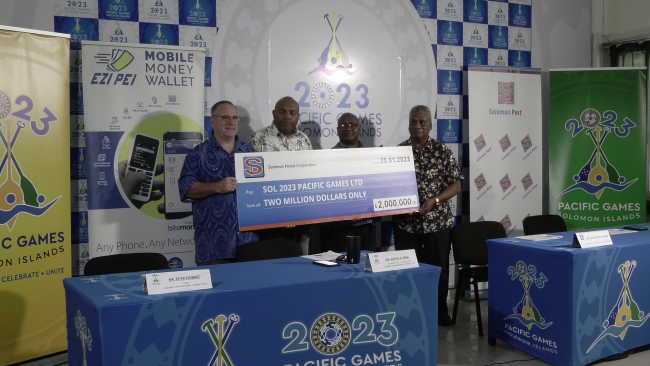 The acting chairperson said they were very excited to be part of the games as one of the sponsors of the 2023 Pacific Games.

He further stressed that the decision to involve in the sponsorship was driven by their desire to see the games successfully staged.

“Not only that but, we realize that the 2023 Pacific Games will be the biggest sporting event in the history of Solomon Islands.

“We’ve hosted Mini Games before, but I believe they were not to the extent that we will see in the 2023 Pacific Games.’’

“And we believe that it is the duty and responsibility of all individual citizens as well as corporate citizens of this country to come in and assist the organizing committee to fulfil what the nation wants, that is to make the 2023 Pacific Games success,’’ he added.

Meanwhile, the GOC Board Vice Chairman, Jasper Anisi on behalf of the board expressed their heartfelt gratitude to the Solomon Post for willingly partnering with them to deliver the games.

“We welcome such a partnership as a reflection of corporate spirit, support and commitment, as our country’s State Owned Enterprises.’’

“Such financial support and commitment will provide financial security to GOC on behalf of the government of Solomon Islands to deliver the memorable Pacific Games this year,’’ Mr Anisi said.

He thanked the Solomon Post team for supporting the games with their silver sponsorship support.

GOC will be announcing other major sponsors of the games in the coming days.

The Government Services Integration Committee (GSIC) of the Office of the Prime Minister and Cabinet (OPMC), held a successful and productive meeting with Heads of ... Read More

The Sol2023 Pacific Games Organizing Committee (GOC) will be looking at lifting the standard of Security Firms in the Solomon Islands as part of preparations ... Read More