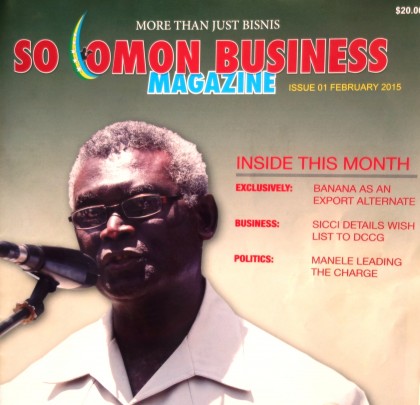 The front page of the new magazine. Photo credit: SIBC.

Solomon Islands’ first ever Business magazine has been published.

Called the “Solomon Business Magazine”, its concept began 14 years ago for its Publisher and Editor, Robert Luke Iroga.

Mr Iroga told SIBC News in an exclusive interview yesterday, the idea to produce Solomon Business Magazine is a result of the country’s growing economy.

“It came about because our economy is growing and if you talk to many people in the region they are saying that the interesting or enterprising or the most economy that grows at a very fast rate is Solomon Islands, so I have been observing that and reading a lot about the CBSI quarterly reports and they seems to indicate that regardless of the narrow base of the economy it’s really widening up, involving all sectors. So I had a long thought about the issue of getting this magazine to be published. I have good discussions with stakeholders in my previous job, I had looked at the opportunities.”

The Solomon Business Magazine is a monthly publication and will be released on the 20th of each month.

Its first release was yesterday.