Premier Suidani has come out clearly supporting the recent calls by Western Province and Temotu Province premiers on the need for state government. 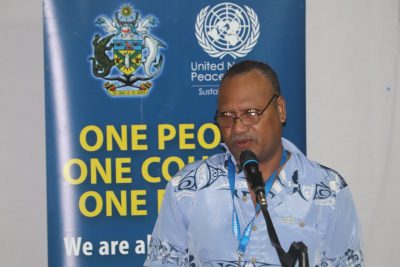 Suidani said that the Townsville Peace Agreement, which is the basis for settling the ethnic tension, commits the government to such arrangements.

He said that Part Four of the TPA obligates the government to give more autonomy to Malaita and Guadalcanal “to effect self-governing status.”  He said “The TPA envisages a process that should have already been completed years ago. But successive governments have never completed this process.”

Suidani further stated that the TPA is not significant only for Malaita and Guadalcanal, but also for all provinces and parts of the country. This “self-governing status” in the TPA could be autonomy as well as a federal state system. We will need to work this out.

“Constitutional changes will not only affect Malaita and Guadalcanal, but all the parts of Solomon Islands. This is why I welcome and support the recent calls by brother Premiers Hon Soaloai of Temotu and Hon Mesepitu of Western.”

This is of urgent importance to national development, peace and unity said Suidani. “This is why I have written to the UN Security Council urgently asking for their assistance in reviewing the lack of progress and suggesting options for moving ahead.”