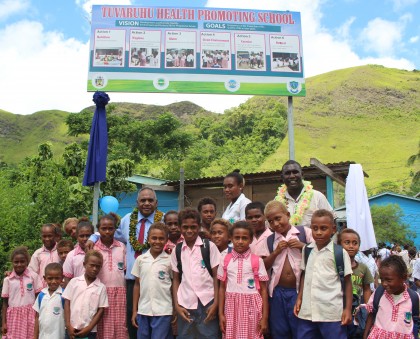 Tuvaruhu School in Central Honiara has been named as a ‘Health Promoting School’ and has received a billboard in efforts to promote health among school children.

Speaking at the event, Mayor Fatai said the concept of the billboard is a framework that seeks to support and build on the good work already happening in schools.

The Mayor also said many schools operate under demanding conditions and unsafe environments and the billboard is to help schools provide a safe environment in which people and children can work and learn.

He also said the approach of the Health Promoting School billboard is effective because it creates a healthy working environment and culture which supports the mental, social environment, spiritual and physical health of all community members.

PARENTS CALLED UPON TO BRING THEIR CHILDREN TO CLINIC

A child receiving vaccination against Polio. Photo credit: News Pakistan. Health workers in Honiara are calling on parents in Honiara to take their children to ... Read More