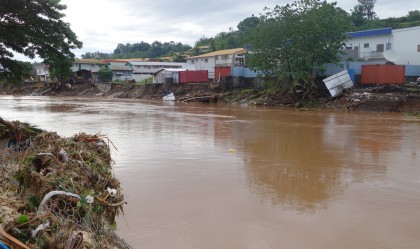 Twenty one people have died and an estimated 52,000 people are affected across the Solomon Islands, after the worst flooding the country has ever seen.

The Government confirms at least eight of the deaths are children under seven years old.

A water and sanitation expert with UNICEF in Solomon Islands says portable toilets or latrines have to be quickly provided at the evacuation centres for flood victims on Guadalcanal.

Donald Burgess says the evacuation centres, mostly schools, are not designed to cater for the up to two thousand people staying in each facility, and they’re in a state of chaos due to deteriorating hygiene levels.

Meanwhile, PACNEWS reports, Fiji will stand in unison with and support Solomon Islands following flash floods in the Melanesian nation that have caused severe destruction and death.

In a message to his Solomon Is counterpart Gordon Darcy Lilo, Fijian Prime Minister Voreqe Bainimarama conveyed the sympathies of the Fijian people in response to this disaster.

Relief supplies for Malaita. Photo credit: NDMO. More than 300 tonnes of rice were being dispatched for distribution to communities around Malaita Province affected by ... Read More