Wale says, Role of media critical for a healthy democracy

The place and role of the media in our region is absolutely critical to ensuring that our democracies can keep growing more open and that our governments increasingly appreciate the need to be responsive to the electorate.

Opposition Leader Hon Matthew Wale highlighted this during his remarks at the closing of the Pacific Media Summit 2022 in Honiara recently.

He said the days of merely publishing verbatim press statements issued by others are long gone. 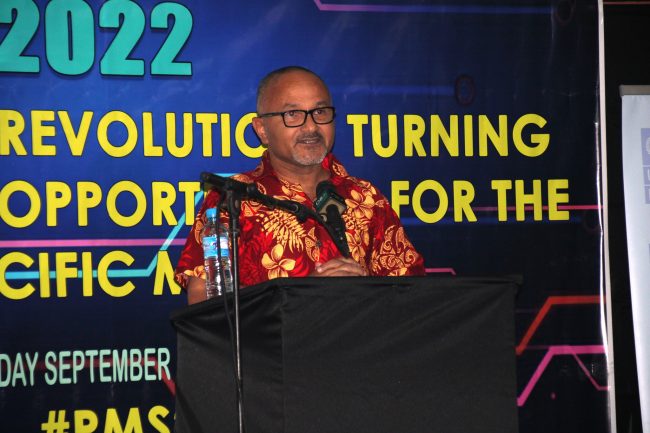 Hon Wale at the PMS closing

Hon Wale said there is a clear duty of care that must require that the media is more discerning of truth and public interest.

“The days of the media merely acting as a public notice board should be long gone, but we find we’re still plagued with it,” he said.

The Opposition Leader said when journalists publish articles on subjects they clearly lack competence in and have not taken the trouble to be well informed on, it makes a mockery of journalism and undermines the credibility of the media in the country.

He said there is a duty of care to at least understand the subject matter on which one is publishing.

“At the risk of sounding elitist, effective communication is dependent on sound language skills. Getting English grammar correct ought to be a basic necessity. Publish in either English or Pijin but not in a convoluted combination of both,” he said.

Hon Wale said the rush to publish breaking news could be at the cost of considered thoughtful journalism that is key to a healthy national political discourse.

He said the public mind has an extremely short memory.

“Well researched and well thought-out investigative pieces keep issues of public interest in current public debate, and force decisions. Sensationalism might sell well but may be taking up resources that should be better spent in the greater journalistic good,” he said.

The Opposition Leader said meaningful and honest debate in the public domain is good for society and our democracies.

Media has a role to facilitate it.

“Of course, these all represent opportunities. Media organizations have an important responsibility to ensure they lead and facilitate a national discourse that strengthens democracy in our countries. Media are the defenders of public interest. There is a clear duty of care that must be taken very seriously,” he said.

The Opposition Leader said democracy must not be taken for granted in our region.

He said electorates are the fundamental base of our democratic systems.

Hon Wale said the role of the media to engage the electorate and citizenry in the governance of our countries is critical to ensuring the health of our democracies.

“That engagement is distorted and retarded to the extent of the electorate’s not being well-informed. And it is up to our media to ensure that our regional priorities are not drowned out in the geopolitical tussle,” he said.

Minister Bradley Tovosia officially switch the transmitter on air The Minister responsible for Disaster Management, Bradley Tovosia has praised the Japanese Government for its gift of ... Read More