Member of Parliament for West Kwaio Constituency Hon. Claudius Tei’ifi is serious about implementing the coconut rehabilitation project for his constituency despite being elected for a short time in office.

The objective of the project is to revive the industry in the constituency.

The Project was launched on the 31st of December 2022 (New Year’s Eve) at Foubaba village in Ward 27 where a site was cleared for a nursery of 10,000 nuts bought from local families that look after the old coconut plantation from Borona Su’u to Su’u Harbour.

According to a press statement from the Constituency Office, a similar nursery site was set up at Busi’i in Ward 28 a fortnight ago for another 10,000 nuts.

It says work and preparations for another nursery site at Ngariga in Ward 26/27 have already started with another 10,000 nuts being purchased and delivered to the site since last week.

It said it will continue this week.

The statement added that this is just the beginning and the project is going to be rolled out to other identified sites throughout the constituency.

In an interview with SIBC news, Hon. Claudius Tei’ifi said this will help the people of West Kwaio in the years to come.

“It is almost 100 years old and old coconut trees throughout West Kwaio are starting to die out.”

“So now that we have started this initiative it will help the people of West Kwaio in the next 100 years as well,” Hon. Tei’ifi said.

The coconut rehabilitation project was started in 2020 when Hon. Claudius was the MPA for Ward 28 and Provincial Minister for Agriculture and livestock in the Malaita Provincial Assembly. 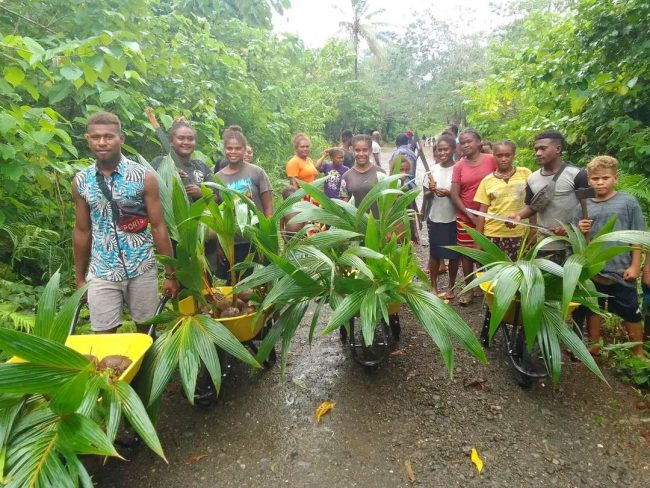 Youths in Ward 28 helped in transporting nuts to be transplanted in 2022 | Photo: West Kwaio Constituency

During that time, he obtained small funding and assistance from the Ministry of Agriculture and Livestock (MAL), and the Ministry of Forestry and Natural Resources which enabled him to start off with 14,000 nuts and 8,800 mahogany seedlings for ward 28 where he represented.

“During the transplant, the plants were distributed to individuals and communities in just 2 days to which I see the demand for these plants in the communities,” Hon. Claudius said.

West Kwaio Constituency Executive Advisor, Walter Maesugea also when speaking to SIBC news said that as part of reviving the copra industry in West Kwaio, the project will also help to address the issue of the dependency syndrome.

“We are hoping that the project will revive the copra industry in the constituency in the next five years.”

“With the increase in the dependency syndrome and free hand-out mentality in the constituency, our Member of Parliament is serious in addressing the matter, by starting with what people already have on their hands that need to be embraced and empowered,” Mr. Maesugea said.

This is part of the Democratic Coalition Government for Advancement (DGCA)’s priority policy Action Plan 2019- 2023.

The DCGA, under its fundamental and productive sector reforms, stated the intention to continue with the revitalization of CEMA to encourage rural farmers to fully participate in the development of the rural economy and the nation.

With that, the Member of Parliament for West Kwaio, though supporting the revitalization strategy, said that the government must seriously look into replanting.

“Instead we should prioritize replanting first and then the revitalizations come next.”

“This we will have the resources like coconut and cocoa in place and ready for the revitalization, Hon. Tei’ifi said.

West Kwaio was once a pinnacle and a hub for coconut and copra industry in the Country which started way back in the early 40s well before the country gained its independence.

The Constituency will also implement its reforestation program which also contributed to the timber and logging industry since the 1960s.

A milestone achievement for 50 farmer groups and consolidators across Guadalcanal and Isabel provinces as they sent a first shipment of premium cocoa to chocolatiers ... Read More