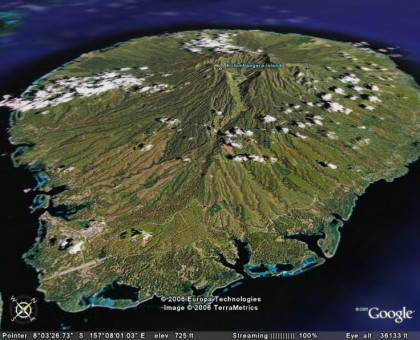 A google map of the Kolombangara island. Photo: Google Map

Work to upgrade and rehabilitate the Ringgi Wharf on Kolombangara Island in Western Province begins today.

In a statement from the Asian Development Bank ,ADB, said the construction involves replacing the existing timber wharf with a larger, reinforced concrete one.

The statement says when the new wharf becomes operational, larger vessels will be able to dock safely at the upgraded wharf site.

This is important as it will allow more convenient and economical movement of passengers and cargo which will improve the quality of life in Kolombangara area.

The statement adds, the new wharf at Ringgi will also boost connectivity between Western Province and the rest of Solomon Islands, providing better access to medical facilities, educational facilities, and markets.

The project is financed by the Solomon Islands Government, ADB, the Australian Government, and the New Zealand Aid Programme.

Meanwhile, construction of new wharves at Keru and Ngasini in Western Province and Tatamba on Isabel Province as well as a landing ramp at Uhu in Malaita Province are planned for later in 2014 under the Domestic Maritime Support Project.

The project has also established a franchise shipping scheme to support remote communities.

A statement from ADB today says improved shipping services and new wharves and jetties can reduce barriers to market access and promote the growth of rural production, adding the franchise shipping scheme under the project will also allow private operators to expand shipping services to commercial – unviable destinations.

ADB is dedicated to reducing poverty in Asia and the Pacific through inclusive economic growth, environmentally sustainable growth and regional integration.