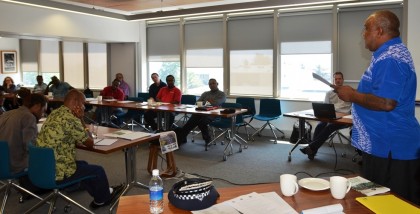 Organised by the RAMSI Special Coordinator’s Office, its main objective is to inform the media fraternity on issues leading up to the RAMSI Drawdown in June 2017 and the arrangements for post-RAMSI.

The workshop is part of the Communication Strategy on the RAMSI Drawdown 2017.

RAMSI’s Public Affairs has decided to start with the media because it believes media is a vital partner in the community outreach on the Drawdown.

Though sensitive as it may seem for Solomon Islanders, RAMSI believes a good understanding of the issue by the media will help the Government, the Royal Solomon Islands Police Force and the Mission to get the right message across.