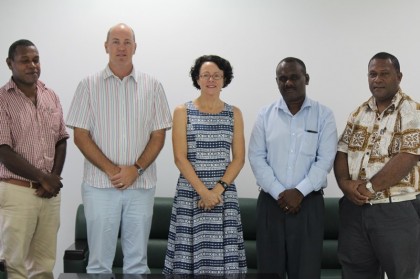 The World Bank Group has made a courtesy call on the Opposition Leader today to brief him on programs the World Bank is currently undertaking in the Solomon Islands.

The World Bank currently has projects with the Solomon Islands Electricity Authority, and Country Representative Anne Tully informed Jeremiah Manele that the program want to reduce the high costs of electricity in the country.

The World Bank Country Representative also informed the Leader of the Opposition of the country’s economic outlook.

Meanwhile, the Opposition Leader has acknowledged World Bank’s continuous support in transformational projects such as the Tina Hydro Project and the Rural Development Programme.

Mr. Manele said World Bank is a key stakeholder, and Tina Hydro is a national project that needs strong political will and support from any Government of the day.

He also acknowledged World Bank programs in other sectors that are expanding the country’s revenue base.