The former Governor General and former member of Parliament for Ulawa Ugi, Sir Waena  personally conveyed these remarks to the Prime Minister.

“Your politics is not restricted to the might of power but through shrewdness in tactical and prudent approaches you made on important issues to the nation. Prime Minister, you’ve done well. Your government, our government,” the statesman said. 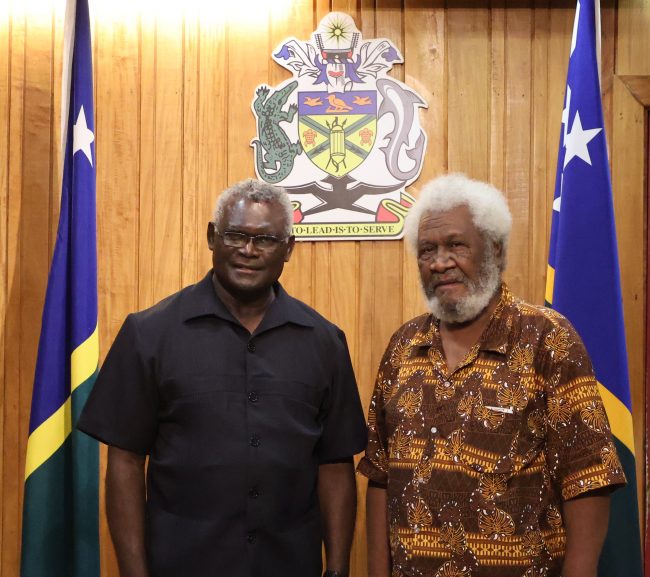 Sir Waena further explained, there was so much criticism against our new development partner however, Solomon Islands will never have the new Pacific Games infrastructure if the Prime Minister and the government bow down to certain powers.

He said, as a small sovereign nation with territorial limitations, Solomon Islands will need the assistance of so-called world powers to come over, hold our hand and lead us.

“And so you’ve done well. For a small nation like us. Continue because we need to tell the world that we exist. We are not a vacuum here. We are a space filled with human beings,” Sir Waena stressed.

Another issue the statesman raised was that of Waimapuru National Secondary School.

This is in relation to rentals and suggestions for the government to convert Waimapuru NSS into a Technical College and eventually a National University of technology.

SINU is for academic studies. The nation is growing. We need to produce our own technocrats.

Waimapuru NSS is a government school.

“PM, I am happy that you spoke so well in the UNGA on behalf of the government and people of this country, congratulations,” he said.

Prime Minister Sogavare responded by saying remaining as a genuine friend to all our bilateral partners provides a wonderful opportunity for the world powers to assist us.

He said, allowing world powers access is broadly to assist us drive our agenda and economy.

“The shift is taking advantage of geopolitics. Help serve our broad agenda,” he said.

Suggestions regarding Waimapuru NSS will be brought to the right authority.

The Prime Minister however supports the idea for Solomon Islands to have its own Technical University.

People who drive the economy of this nation are those who do the things that convert the resources of the country, the trades’ people. A Technology University is therefore needed, he said.

The Solomon Islands Expo 2020 Dubai Pavilion report was officially handed over to the national government yesterday at the Heritage Park Hotel in Honiara. The ... Read More

Eight Premiers and representatives of the country’s nine Provinces have met with the Prime Minister Honourable Manasseh Sogavare today at the Office of the Prime ... Read More