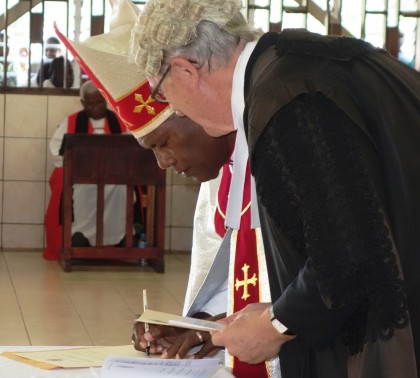 The Anglican Church of Melanesia ACOM has a new Archbishop.

He is the Right Reverend George Takeli, hailed from Ulawa Island in the Makira Ulawa Province.

Reverend Takeli was enthroned as the new Archbishop of the Anglican Church of Melanesia at the Saint Barnabas Cathedral in Honiara this morning.

Meanwhile, the newly enthroned Archbishop Right Reverend George Takeli acknowledged the members of the Anglican Church for entrusting him the high post.

He says plans are in place to visit the Office of Prime Minister of Solomon Islands and the Republic of Vanuatu to discuss how best the Anglican church can support the work of the government.

“As part of this relationship building as well I have made plans to make a courtesy visit to the Office of the Honourable Prime Minister and his Government of Solomon Islands and the Republic of Vanuatu to discuss with them the role of the church in their countries and to identify areas which the Anglican Church in those countries can better support their governments to achieve their overall goals for their communities.”

Guests from as far as United Kingdom, Canada, Australia, New Zealand and the United States of America attended the ceremony.

RINI SAYS CHURCH MUST WIN AND KEEP YOUTHS IN CHURCH