A group of 12 Australian Defence Force (ADF) personnel have been in Solomon Islands to progress work on the Western and Eastern Border Outposts and the Solomon Islands Police and Emergency Radio Network (SIPERN). The 12 personnel consisted of two teams, one focussed on radio communications and the other on infrastructure. 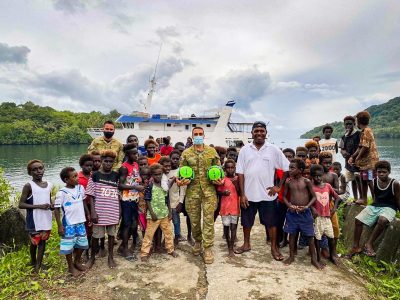 In March 2022 Australia and Solomon Islands agreed to deliver a national police and emergency radio network for Solomon Islands. SIPERN will deliver a reliable, resilient and ready radio communication network in Honiara and across Solomon Islands connecting the Royal Solomon Islands Police Force, Ministry of Health and Medical Services and the National Disaster Management Office. The first phase of the project will be delivered in Honiara ahead of the Pacific Games.

During their visit the radio communications team visited Honiara, Taro, Kulatanai, Harapa, Mono, Gizo, Munda, Noro, Buala and Kirakira to better understand the locations, roles and capabilities of the project.

“We were fortunate to travel to different parts of the country and it was made very clear to us how dispersed the population is and how important this radio network will be for the people of Solomon Islands,” Major Fordham said.

In October 2019 and March 2022 Australia and Solomon Islands’ Prime Ministers agreed to build the Western and Eastern Border Outposts respectively.

Following COVID-19 delays, the infrastructure team travelled to the Western Border Outpost site at Lofung South. Australia is expediting this project and early-works are expected to begin later this year. Following this they travelled to Temotu, visiting Lata before travelling to Vanikoro. The team visited six potential sites for the Eastern Border Outpost, assessing them for technical suitability.

Infrastructure team leader Major Chris Zdjelar said, “We looked at a range of sites on Vanikoro, including those that had been shortlisted by the Solomon Islands Government in 2021.”

“To assist our technical assessments we talked with communities to better understand the environments we were looking at and the feasibility of building at each site, taking into account things like nearby logistics, amenities and access to site” Major Zdjelar said.