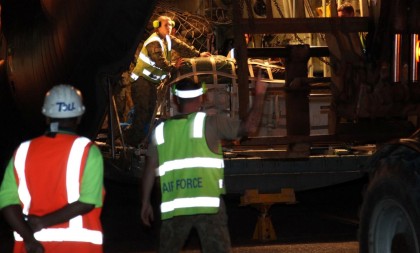 In a brief statement on its social media network, Australia in Solomon Islands says the aircraft transported a 12-person civilian and defense reconnaissance team to assist the country recover.

It adds, the team will work with the Australian High Commission Emergency Response Team to undertake engineering and humanitarian needs assessments.

The Government of Australia has recently announced an additional 1.6 million to assist the government’s flood recovery efforts.

The team worked with the Ministry of Infrastructure Development and local contractors to undertake the assessment.

This is in support of the Government’s response to flash floods which devastated the capital and other parts of the country last week.

A statement today confirms that Ms Osnat Lubrani, United Nation’s Resident Coordinator for Solomon Islands and co-chair of the PHT, is in Honiara to meet with the Government, donors and humanitarian partners to determine where PHT expertise and supplies are most needed.

Ms Lubrani says PHT is committed to working with the Government across all response areas, including coordination, shelter, health, water and sanitation.

PHT also share its deepest sympathy to the Government and people of Solomon Islands for the loss of lives and destruction of homes and infrastructure.