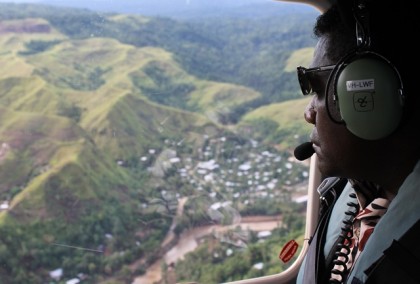 Prime Minister Gordon Darcy Lilo has assured victims of last week’s flash floods that the Government will do all it can to assist them restore their lives.

Speaking after an aerial assessment of the affected areas in Honiara and around Guadalcanal, Mr Lilo says with the assistance of its partners the government will ensure that normal life is restored in the affected areas.

He says the Government will move towards major reconstruction especially on Honiara’s infrastructure taking into consideration the unprecedented scale of the disaster which the capital city had experienced in the recent days.

The Matanikau river days after the recent flash floods. Photo credit: SIBC. The undersecretary for Administration and Finance within the Ministry of Health and Medical ... Read More

The foundations of a building washed away by the recent April flash floods. Photo credit: SIBC. The Solomon Islands community in Port Moresby is organising ... Read More