Birao House of Chiefs in Marau, East Guadalcanal has boycotted a consultation awareness on the extension of the life of parliament which was held at Marau station yesterday by East Guadalcanal Member of Parliament (MP) Bradley Tovosia and his 10-man delegation. 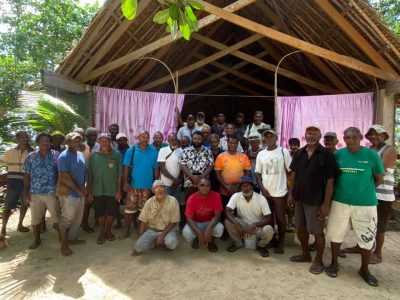 Nine tribal representatives of Marau Nimani Araha ( literary translates as Chiefs’ House) during a gathering at Marau last year to form a Taskforce Committee to facilitate the registration process of the Marau Nimani Araha. Photo Supplied

Reports reaching SIBC News today states that the Birao Chiefs adhered to the recent call to boycott the consultation which aimed to advocate on the extension of the life of parliament for another year.

It says the MP’s delegation includes three Political Appointees from the Prime Minister’s Office, three Ex-militants and three others including his Constituency Development Officer.

“Our chiefs were not consulted prior to the program, not even the Guadalcanal Provincial Government, this is a complete disregard for us,” a statement from the Birao House of Chiefs representing the Marau Nima Ni Araha and Bubutalihu Valena Nonoe, on behalf of the people of Birao ward, East Guadalcanal, said today.

In their recent joint meeting, representatives of the two house of chiefs, in agreement and show of solidarity hereby declare their common position and stand on the proposed extension of the life of parliament from four to five years.

“Never at any time, we the people of Birao ward have supported the current government’s proposition and do not subscribe to the move to implement the proposed extension of the life of the parliament.

“It is our sincere belief and absolute duty as citizens of this nation, to accord respect and uphold the supremacy of the Solomon Islands constitution in all manner. That in the past, present and in the future, we as sovereign citizens of this country are bound to protect our constitution, protest and speak-out against any action taken by any ruling government or whosoever to undermine the rule of law in Solomon Islands,” a statement the chiefs issued on Sunday, said.

The statement adds, “We the people of Birao ward in East Guadalcanal, pledge to respect and uphold section 73(3) of the Solomon Islands Constitution which stipulates that parliament’s life “shall continue for four years from the date of the first sitting of parliament after any general election.”

“We believe our constitution is the supreme law of this country thus any proposed amendment by the ruling government to that effect should be subject to a national referendum seeking the consent of the people whom the government represents in parliament. Any action in contrary, is negligent in nature and must be condemned in the strongest term. We the people of Birao ward have unanimously opposed to the proposed extension of the life of parliament,” the chiefs said.

The chiefs add, “We strongly feel that the ruling government failed its duty to the people of Solomon Islands that is, to protect the constitution and on the outset is irresponsible by failing to plan and disregard the constitutional duty of its citizens to vote by proposing to delay the 2023 National General Election.

“We subscribe to the view that the 2023 Pacific Games in any way should not take preeminence over the constitution of this country. We further raise as a precaution, that a bad precedence would be set for future governments to repeat this situation. We firmly believe that any plan by the current ruling government to pursue such amendment should be addressed through a national referendum, to seek the consent of its people and those whom they govern before making the necessary amendments.”

The Birao ward chiefs have declared their intension to boycott any talks or consultation planned by their Member of Parliament (MP) to advocate on the matter of the extension of the life of parliament for another year.

Reports reaching SIBC News said the delegation held an awareness at Sangasere yesterday evening before leaving for Avuavu this morning.

The statement from the Birao chiefs said their people have question the genuiness of the consultation and perceived such activities as a waste of time and valuable resources.

“Instead, the people of Birao ward are willing to meet and talk with our Member of MP on the following development priorities;

“We the people of Birao ward strongly feel that these are the priorities affecting the lives of our people and our MP should prioritise them, not the proposed extension of the life parliament, a decision which potentially has already been deliberated on and approved by the cabinet.

“Our appeal is for us to engage in active consultation with our Member of Parliament (MP) on the above points as a matter of importance. May God bless Birao ward, Guadalcanal Province. May God bless Solomon Islands,” the statement concludes.