Solomon Noni Corporation is once again raising the country’s flag overseas – this time in the European market. 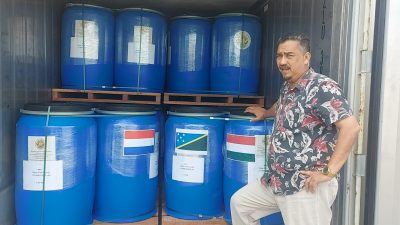 This is following its recent export of 10 tonnes of noni puree, which are packed into 48 drums, and are now en -route to Europe this week.

Despite the long wait for the promised tax exemption from the national government to lower the costs of exporting noni overseas, businessman-turned-politician Hon Bodo Dettke, who is Member of Parliament for North West Guadalcanal, had to meet his client’s needs to export noni into Europe as demand for Solomon Noni grows.

Hon. Bodo’s vision to introduce noni in 2017 was to help the people of North West Guadalcanal by providing an avenue to help subsistence farmers whose cash economy is largely based on selling fruit trees, vegetables, and cash crops, which now paves the way forward for his constituents, many of whom now have their own noni farms and are earning money from their noni trees.

Hon Bodo, the owner of Solomon Noni Corporation, described the achievement as another milestone for his company, despite their ongoing wait for the government to grant them some sort of organic certification so that their products can be sold more easily abroad.

“We turned the noni fruit into puree, which will be sent to other factories in Europe to be turned into their finished products,” Bodo explained.

“A total of $50,000 was also paid out in that shipment to the noni northwest farmers who sold their noni fruits to make up the shipment.”

Bodo also acknowledged the Samoan Government and a Samoa Noni Association for partnering with Solomon Noni Corporation, making it possible for them to export their first noni puree to Europe.

“If people are willing to pay for the freight of the container which costs about $150,000 to ship the container to Europe, that is an indication that we must have a very good noni product, especially for health purposes.”

He said this is the third shipment Solomon Noni Corporation did in partnership with the Samoan Government and another Noni Association in Samoa.

“We already exported two shipments of noni puree under the same partnership to Japan and this is the first time we export to Europe.”

Bodo also clarified that Solomon Noni Corporation is not currently paying noni from other farmers due to a lack of storage space at the factory.

He added that if the national government is serious about noni export, it should consider assisting the North West Constituency Noni Factory to expand so that other farmers can sell their noni products.

Bodo said he remains optimistic that one day a ruling government will take agriculture seriously and improve the standard of living of people in the villages.

A Veterinary team from the USNS Mercy have visited local farms in Honiara as part of their veterinarian engagements under the Pacific Partnership 2022. Pacific ... Read More

The Court of Arms. Photo credit: Solomon Islands Government. The Ministry of Agriculture and Livestock has officially launched a first ever Agriculture Policy Bank in ... Read More