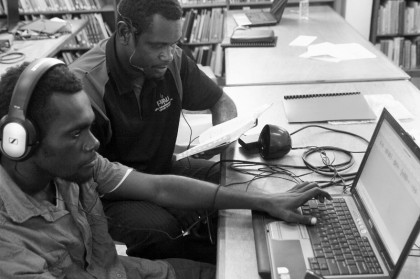 This Christmas, Solomon Islanders from eight language groups will be able to hear a recording of the Christmas story in their own language.

This is being made possible by way of a Language Recording Workshop conducted at the Solomon Islands Translation Advisory Group (SITAG) in cooperation with local churches.

A statement from SITAG says during the workshop, participants are being trained to use a computer software programme called Audacity, to produce and edit audio recordings.

Once the recordings are produced, they will learn how to load them onto SD cards for mobile phones or other devices like MP3 players.

The training course has been developed by Lauren and Connie Runia, who serve as Pacific Media Coordinators for S-I-L International.

The Runias, who are from the USA, have recently run a similar course in Papua New Guinea and for the first time are offering it here in the Solomon Islands.

Workshop participants will have the skills and knowledge to continue produce recordings in local languages once the two weeks workshop is completed.