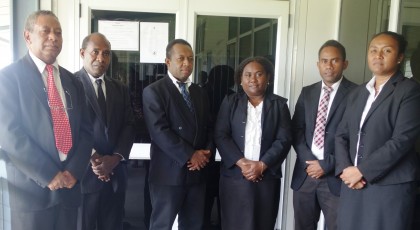 Five new Magistrates have been sworn in at the High Court, taking their Judicial Oaths and Oaths of Allegiance before Chief Justice Sir Albert Palmer today.

Ricky Inomea, Fatimah Taeburi and Edwin Saramo have been sworn in as Principal Magistrates while Natalie Kesaka and Augustine Aulanga took their oaths as First Class Magistrates, to join the Magistracy.

Speaking at today’s swearing-in ceremony, Chief Justice Sir Albert Palmer told the legal practitioners they have demonstrated that they are the best candidates for the Magistracy posts.

“You have demonstrated that you are the most suitable candidates to take up such honourable, responsible and demanding tasks of a Magistrate by virtue of your past track records, performances and achievements. Your appointments have not been taken lightly, for the duties, roles and responsibilities of a Magistrate are tough and will require strength and courage on your path to fulfill them.”

The Chief Justice says it is for this reason that the new Magistrates have been selected and entrusted with their new responsibilities.

“But it is for that very reason you have been selected and entrusted with the responsibilities of not only protecting and maintaining the independence, reputation and integrity of the courts in the country but that you will also be able to deliver justice timely, fairly and impartially.”