Former militants issues are to be addressed systematically

The DCGA Government is concerned and sees it irresponsible and immoral the way Opposition Leader is asserting in the media that the Government is going to dish out $300,000.00 as payment to former militants. 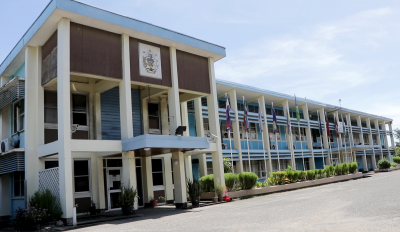 Office of the Prime Minister and Cabinet. Photo: Jared Koli

The Government is concerned that such allegations in the media could stir up false public expectations and frustration. A responsible Leader would have carried out proper and due diligence and confirm facts before raising sensitive issues like those of the ethnic tension.

Unverified information has the potential to create social disorder in society and the Opposition Leader knows it, why he decided to trod down that path is anyone’s guess.

The government stated, “the DCGA Government under its policy 5.2.3.7(c) is specifically to ‘implement the TRC recommendation’. That is exactly what the Government has been tirelessly working on over the two years.”

Collaborations by relevant ministries have now completed the necessary documents and instruments regarding the TRC report to be tabled in the coming parliament sitting.

“What the Government can assure the public is, any issue with any compensation and/or claims will be dealt with by a committee to be called the Reintegration and Reconciliation Committee (RRC) and a commission to be called Conflict Prevention and Victims’ Rights (CCPVR), and these bodies are prescribed for under the recommendation chapter of the TRC report,” it stated.

The commission and the committee will be established after the tabling of the TRC Report in parliament. This is in compliance with the recommendations set out in the TRC Report.

What the public needs to be clear on, is the issue of any past conflicts will be dealt with by these independent institutions and they will be established after the tabling of the TRC Report in parliament.

Currently the two national policies to guide the governance and implementation of the reintegration and rehabilitation of those involved and affected by the past conflicts until it is completed.

It further explained, once the TRC report is passed through parliament then that will give way for Government to work on the processes to address any issues regarding the ethnic tension and the border conflicts.

“The issue raised in the media by the Leader of Opposition on funding a rented office or payout is news to the Government.  Any right minded person will ask the basic question as to which budget head under any government Ministries or institutions will cater for such payments and costs,” said the government statement.

Secondly, processes are already in place prescribed in the 60 pages of TRC Recommendations to address those issues. What the government is currently doing is developing the mechanisms to establish the processes, which will then address any claims.

The only regret that Government has is the establishment of the Committees and commission should have already happened, if not for the November riots last year.

The technical team was working to finalize documentation for tabling of the TRC Report when the November riots happened.