THE Security Cooperation Agreement that Solomon Islands signed with The People’s Republic of China (PRC), complements its existing security arrangements under the country’s bilateral treaty with Australia.

This is according to Prime Minister Manasseh Sogavare during an exclusive interview with RNZ, The Guardian and SIBC News on the sidelines of the Pacific Islands Forum (PIF) Leaders Meeting in Fiji’s capital, Suva, last week . 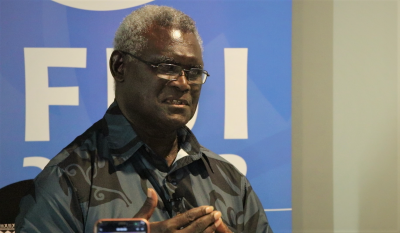 “There is no military base or institutions in the agreement. The reason is simple: the moment we establish a foreign military base, we become an enemy and we also put our country and our people as targets for potential military strikes.

“Our partnership with China is genuine,” Sogavare said in his first media interview since the security deal with PRC earlier this year.

Sogavare said Australia remains the “security partner of choice” for Solomon Islands and he would only call on China to send security personnel to the country if there was a “gap” that Australia could not meet.

“I can understand the rationale for such concerns, however, I believe it is now time for our friends and partners to also understand what we are saying and trust us.

“It’s all about trust and accepting our explanation and our commitment to the peace, progress and prosperity in our region.”

PM Sogavare said Solomon Islands respect the sovereignty of each country when it makes a decision.

The principle of respect and sovereignty is enshrined in the 2018 Pacific Islands Forum Boe Declaration, he pointed out.

Sogavare adds, PIF plays a critical role to ensure that sovereign decisions by each Forum country do not undermine the security of forum members, individually or collectively.

“And so as members of the Forum family, we must all understand the diversity of the region, the countries’ peculiarity and their stage of development and needs.

“We must also ensure open lines of communication and meetings, such as what we do now, talanoa, speak to each other, raise concerns and ask questions, especially during these challenging times when we are confronted with COVID-19 pandemic and the effects of the Ukraine-Russia war.”

The Prime Minister said he held a “very frank open discussion” with a number of Forum members and they appreciate it.

“I’ve spoken to them that there is no provision of a military base or institution to be built in Solomon Islands.

“It’s about trust and confidence, we need to trust each other and we need to be genuine about those trust,” Prime Minister Sogavare said.

Details of the SI-PRC security deal have not been made public, but a draft was leaked in March this year, which has set off alarm bells in Western countries, especially in Australia and the United States, particularly language in the text saying China would be permitted to “carry out ship visits to, carry out logistical replenishment in, and have stopover and transition in Solomon Islands”.

The Security Cooperation Agreement between Solomon Islands and China was officially signed in April 2022 – a month after the draft copy was leaked.

Until then, the Government remained silent about when the actual text of the deal will be published and accessible for the public.

The Prime Minister could not divulge on when it will be accessible.

European Union EU flag in the wind. Photo credit: EU. The European Union, EU, will soon have an Ambassador in Solomon Islands. The Director for the ... Read More