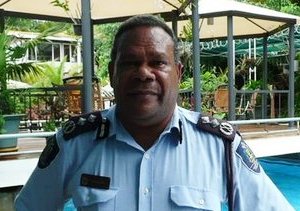 Former Deputy Police Commissioner Walter Kola was in the Magistrate Court this morning for the trial into his traffic charges.

Mr Kola is facing one count of careless and inconsiderate driving and one count of failing to stop and report.

He allegedly committed the offences on April 2014 at Point Cruz.

He drove the vehicle into the island in the middle of the road and hit an electric post.

A police officer was called to testify this morning.

The witness told the Court he was one of two other officers who saw Mr Kola arrive at the Police headquarters at Rove with the vehicle in the morning.

He says the day was fine no vehicles were on the road.

He told the Court he saw damages to one of the rear tyres, a front tyre had busted and there was a scratch on one of the lights of the vehicle Kola was driving.

He says he went to the Communications office at the Police Headquarter to report the incident after he saw it.

Mr Kola has denied the charges against him.

The High Court of Solomon Islands. Photo credit: SIBC. Preliminary hearings into the lawsuit against the Parliamentary Entitlements Commission (PEC) and the Attorney-General has been adjourned ... Read More