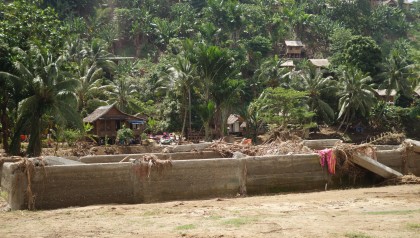 The foundation of a building washed away by the recent April flash floods. Photo credit: SIBC.

Landry Losi told SIBC News he is concerned following so many complaints raised by flood victims that authorities are slow in their response to assist them.

Mr Losi says the Government and its agencies should be transparent in their spending for the disaster victims.

He also criticised the Government’s decision to share $300,000 to each Member of Parliament in the name of the flood victims.

“We are also surprised because each member of parliament has received $300,000 for the disaster and maybe the government should not share such funds to all constituencies but only to those affected by the disaster. Additionally, whether the money has achieved its purpose or not is another question as all funds expended should be accounted for and made known to the people of the country.”

SINU is worried its programs have been disrupted by the recent disaster. Photo credit: SINU. The Solomon Islands National University, SINU, is concerned, its academic ... Read More