The Deputy Premier of Guadalcanal, Hon. Lazarus Rina, today has clarified the article titled ‘Huge Land Offer’ which attracted a lot of negative comments and confusions from Guadalcanal people since it was published last week. 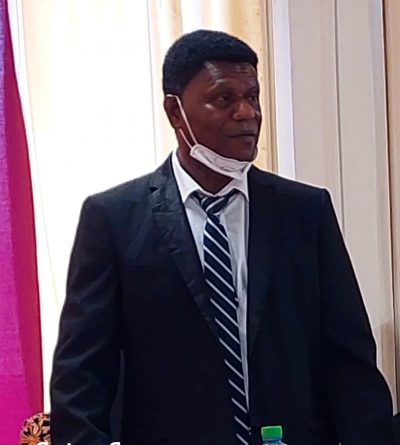 Speaking to GP Media today, he explained that the article’s title took away the genuine purpose or content of the objectives which based on the premise of national unity, building better friendship, and boosting provincial revenues once Guadalcanal Province builds its headquarter.
“First of all, the Executive Government is not selling any land as many have bitterly and wrongly expressed on social media.
“It is surprising to see that some prominent Guadalcanal people were quick to verbally attack me on social media.
“Some of them probably might be taken off guard by the title, rather than seeing the objectives of the Executive to help build national unity by forging new and meaningful friendships with our sister provinces.
“Second, many people are confused and thought that this is for individual business owners, rather it will be on a provincial government to provincial governments level” Deputy Premier Rina stated.
He furthered, “Instead of huge plots of land, we’re looking at the National Art Gallery concept where individual business owners set up their shops to display their arts and crafts, but instead of individual business owners, we want to have these areas reserved for the eight provinces to set up their either mini administrative centers” he stated.
Moreover, he expressed that the last thing the Guadalcanal Provincial Government wants is an increase of illegal settlement or unplanned squatters.
“This is the last thing we want to have; we have lived long enough to see what illegal settlements can cause on Guadalcanal and the country” he stated.
Similarly, he moved on to explain that the idea can be explored with other provincial government to provide spaces for Guadalcanal Provincial Government in their provinces.
“In doing so, we’re hopeful that this will bring more national unity within our provinces, rather than causing ethnic differences and divisions which can dismantle and disunity our people” Deputy Premier Rina said.
“This will contribute a lot to our national consciousness which is vital for our sovereignty” he stated.
Moreover, he also stated that there are many Guadalcanal people living and working in the Western Province, especially in Noro and Gizo. Some of them are living in squatters, rather than proper settlements.
He, therefore, expressed that this is where Guadalcanal and Western provincial governments should dialogue to find amicable solutions in addressing the squatter settlements.
He then reiterated that the Executive Government is not selling or offering any land for settlements or for individuals to invest, but rather it will be a provincial government to provincial government mutual agreement.
To that extent, he appealed to other Guadalcanal landowners to refrain from selling their land without proper regulatory mechanisms from the provincial government planning as this will give rise to many land issues and disputes.
In sum, he appealed to those Guadalcanal people who commented negatively on Facebook to comment responsibly and constructively, rather than negatively when such sensitive issues arise.
-GP Media
CATEGORIES GovernmentGuadalcanal ProvincePeopleSolomon IslandsTop Headlines
Share This

A street in Malu'u, North Malaita. Photo credit: Panoramio. A three-days Tourism workshop is currently underway in Malu'u, NorthMalaita. Being the first of its kind, ... Read More