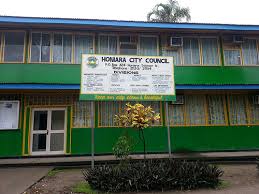 The Honiara City Councillors will elect a new City Mayor on the 30th of this month.

Honiara City Clerk Charles Kelly says nominations for the Mayor’s post opens on the 29th of this month followed by the election 24 hours after the nomination lapse.

“Calling for a nomination is of the 29th of December. This means a whole day and night until 6am the next day and then the Mayor’s election will be on the 30th of December.”

SIBC News understands of the 12 councillors, eight are newcomers.