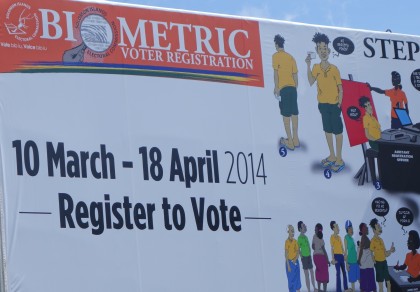 A billboard advertisement of the registration exercise. Photo: SIBC.

A North Malaita man residing in Honiara has questioned whether people registering at the out-of-constituency registration Centre in Honiara will find their names on the polling day at their respective polling stations.

John Rongodala, originally from Lau-Baelelea but living in Burns Creek, told SIBC News over 5-hundred people have already registered for Lau Baelelea in Honiara, but they are now worried if their names will be at their respective polling stations on election day.

Mr Rongodala says a lot of people are registering under the Takwa polling station in Ward 10, but people from ward six also registered to the same polling station.

He said this is confusing.

“In the current registration, some people from Sulagwalu of ward nine have been registered to Takwa in ward ten and some in ward six, which is far from the ward, were also registered under Takwa. The question is, how sure will people be when arriving at their polling station on polling day to see their names on the polling list, because from what we understand and our observations of the current registration, the whole ward ten is registered under Takwa, so the question is will I see my name on the polling list at Takwa comes the polling day?”

Meanwhile, the Lau-Baelelea voter called on the Solomon Islands Electoral Commission office to properly inform the public of what they should know before they can be registered.

SIEC logo. Photo credit: Youtube. The Solomon Islands Electoral Commission (SIEC) clarifies - a person does not have to be a registered voter to be nominated ... Read More