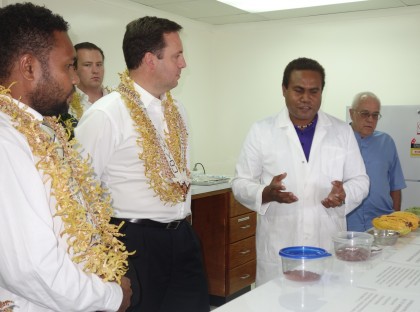 The new laboratory was officially opened by the Minister of Commerce Labour and Immigration Willie Bradford Marau and the Australian Parliamentary Secretary for Foreign Affairs and Trade, Steven Ciobo MP yesterday.

The more than SBD$600,000 projects will ensure farmers produce quality cocoa products for the international market.

“My Government, the Democratic Coalition for Change welcomes such an initiative that will have positive changes to our rural cocoa growers, traders, exporters and potential processors with the avenue to assist and identify the quality of their cocoa products so as to be competitive in the market overseas.”

Meanwhile, Parliamentary Secretary, Ministry of Foreign Affairs and Trade of Australia Steven Ciobo said the initiative indicates the achievement of the Australian and the Solomon Islands government.

He said the lab will create maximum opportunity for local cocoa farmers.

“And in that respect we think it’s very very important that we create maximum opportunity for those cocoa farmers to be able to benefit and exploit the product that they grow.”

The laboratory was funded by the Australian Government through the Pacific Horticultural & Agricultural Market Access Program, PHAMA, located at the Commodity Export Marketing Authority Office.

Icons in Medicine. Photo: Icons in medicine The Ministry of Agriculture and Livestock has thanked Honiara residents for participating in the food security and market ... Read More