The Ministry of Finance and Treasury (MoFT) is working on settling dues owed to the Solomon Islands Ports Authority (SIPA) for arrears on charges of containers dating back to 2017.

These are containers containing essential medicines and consumables.

Permanent Secretary for MoFT McKinnie Dentana confirmed this at a media conference yesterday. 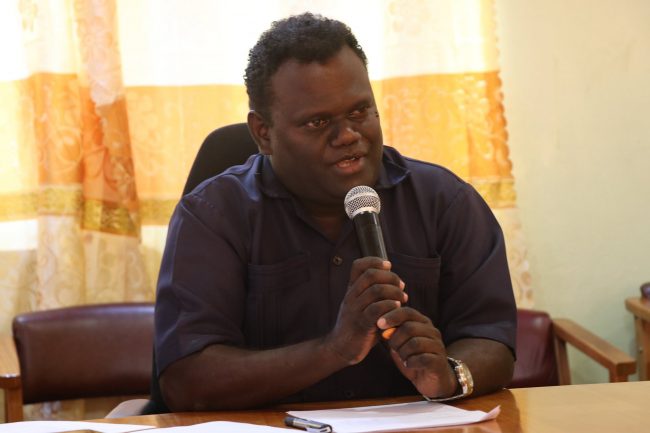 Permanent Secretary of the Ministry of Finance and Treasury McKinnie Dentana

He said this is part of the ministry’s ongoing efforts to address the slow processing of the Ministry of Health’s containers of medical supplies.

“There are building up of port charges on containers from 2017 or 2019. And all these arrears, just to confirm that we’ve formalized it through the central data board over the last few days so that we can clear all the outstanding charges from Ports in relation to the Ministry of health’s supplies,” he said.

Mr Dentana also assured that he will be having discussions with SIPA and the Ministry of Health to ensure that the containers of essential medicines and supplies are released as soon as possible.

“This is to ensure that when these containers arrive at the wharf, there should be a common understanding that they’ll be quickly released and not delayed.

This type of arrangement has been done in the past but there’s probably some kind of misunderstanding and miscommunications that caused these kinds of arrangements to have died down,” Mr Dentana said.

He also confirmed that the Ministry has increased the imprest for the National Medical Store to support fast processing of containers being held up at Ports.

Meanwhile, Incident Controller at the Ministry of Health and Medical Services, Dr Nemia Bainivalu also reiterated during the media conference that the covid-19 pandemic has disrupted the procurement of medical supplies to the country.

“The timing of the release of containers takes 4 to 5 weeks whereby based on our procurement and supply systems when we make orders to international suppliers, we want the supplies to arrive by May or April every year.

Unfortunately, this year it was different due to covid-19 where international shipping schedules delayed the arrival of the containers that arrived in June and July. So, this also delayed processes to release them which affects the availability of medications and consumables in hospitals, clinics, and provinces,” he explains.

Dr Bainivalu further explained that the increase in imprest for the National Medical Store will ensure that funds are available at hand to easily facilitate the release of containers at various Ports.

“We will also be looking at some of the paperwork at the Ministry to sort out the delays that happen during the processing of payments.

But we are hoping that the issue of shipping delay will not affect next year’s supply,” he said.

A statement from the Ministry of Health last week said a total of 20 containers containing medical supplies and consumables were being held at SIPA pending clearance work.

Two of these containers were cleared with medical supplies delivered to the National Medical Store.

It also assured that the Ministry is working closely with freight forwarding agencies including GS agencies, TRADCO and Express Freight Management to release some of its priority medical supplies, while working on the payment process.