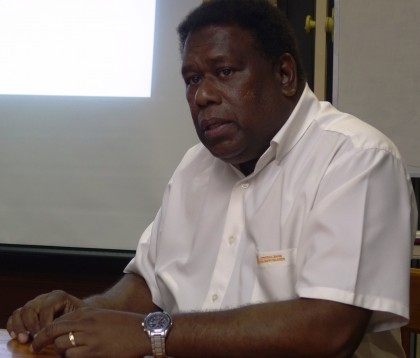 The Governor and Chairman of the Central Bank of Solomon Islands (CBSI) Board, Denton Rarawa has announced, the CBSI monetary policy stance for the next six months will remain accommodative.

Governor Rarawa made the announcement in CBSI’s recent Board meeting.

A statement from CBSI says this complements the expansionary policy of the Government which aims at growing the economy and address the development needs of the country.

Rarawa says the inflationary pressures had risen in recent months, but are expected to subside as the year progresses to within the 3-5 percent range.

The pressure from a stronger US dollar should be countered by the weakening of other invoicing currencies against the US dollar, and thus against the Solomon dollar.

The Governor reaffirms the current exchange rate policy remains unchanged with the SBD pegged against a currency basket.

Rarawa adds the depreciation of the SBD leads to an improvement in the competitiveness of local exports to helping cushion inflationary pressures.

He advises, the Central Bank would continue to monitor both the security and foreign exchange markets.

Mr. Rarawa confirms, the local economy is projected to grow at a rate of 2.9 percent this year and increase to 3.1 percent next year.

The expected major drivers for this growth include construction, manufacturing, hotel and restaurants sectors and public spending.