NESU YET TO RELEASE ALL 2015 EXAM RESULTS 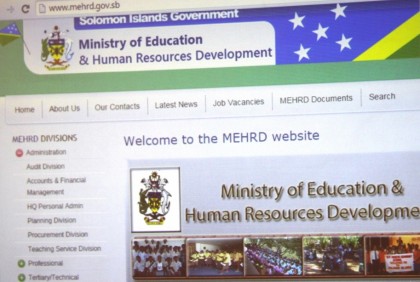 The Homepage of the MEHRD website on display. Photo credit: GCU.

The National Examination Standard Unit (NESU) is yet to release the transition rate for all 2015 examinations.

NESU Director Linda Daisy Wate told SIBC News, the transition rate is yet to be released.

Last year, the transition rate was announced after the Education Minister signed the release of Examination results.

It shows, 99 percent of standard six students have been placed to secondary schools out of 11,600 students enrolled.

The overall performance of Form 6 students into Form 7 last year was outstanding compared to 2014.

SIBC News understands, the Minister of Education has signed the release for all examination results this week.

The Embassy of Japan in Solomon Islands. Photo credit: SIBC. The Japanese Embassy in Honiara has handed over more than $600,000.00 to the Adakoa Rural ... Read More