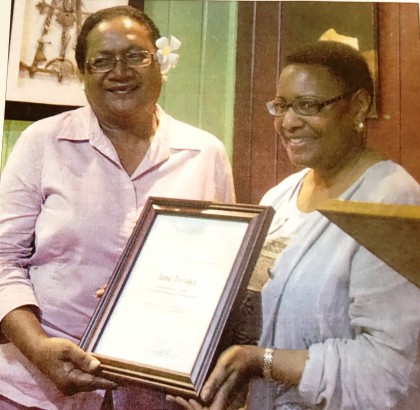 Jane Tozaka was awarded with the Secretary of State’s International Women of Courage Award . Photo: SIBC

A statement from the U.S. Embassy Port Moresby said this award honors women who are making history in their countries and communities.

The Embassy encourages nominations of women who have worked to better their societies, fight discrimination or strife, resolve conflicts, as well as those who have taken risks to run for office or break down barriers in order to promote positive change.

U.S. Ambassador Walter North said they want to celebrate the contributions of some of the amazing women who are standing up for our future, adding that a woman of courage might be an educator, a health practitioner, a lawyer, or a human rights defender.

Ambassador North also said she might be a religious leader, in business, a healer, a political activist, or a peace builder, or women working in the political, human rights, economic, social, judicial, health, educational, press, media, peace and national reconciliation, and scientific and technological arenas are also eligible.

The U.S. Embassy will consider women who have taken unusual risks, surmounted difficult obstacles, or challenged harmful cultural practices or discrimination in their efforts to promote progress for women and girls, and for their society as a whole.

Each year, the U.S. Secretary of State presents one exceptional woman with this prestigious award.

Nominations will close by 14 November to the U.S. Embassy in Port Moresby.

NEWER POSTERADICATING ALL FORMS OF VIOLENCE IS PRIORITY: PRENDERGAST
OLDER POSTINTER-ISLANDS RUGBY TO SEMI-FINALS NEXT WEEK