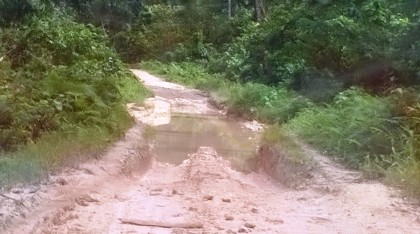 A similar but deteriorating stretch of road in North Malaita. Photo credit: SIBC.

Road users from Afufu to Gwa’ago in ward eight, North Malaita, are grateful that their seven kilometres stretch of road has been repaired and improved.

The contractor, Mr. Kelly Wanefiolo has engaged ten people to carry out the labour-based road maintenance which was completed recently.

“The person responsible for the labour-based contract and his group have done a good work and if individuals who were awarded contracts from MID could do the same work as Mr. Kelly Wanefiolo’s group, our roads will greatly improve.”

Mr. Kiri says five men and five women were employed by the road contractor to carry out the repair works.

NEGLIGENCE BY AUTHORITIES WOULD COST LIVES

The Kwaiafa bridge in East Malaita which was destroyed by flood waters. Photo credit: SIBC. The negligence by responsible authorities would continue to cost lives ... Read More

A 3D model of the Central Market area under the project. Photo credit: Supplied. The Ministry of Infrastructure Development (MID) says work has started to ... Read More