The Democratic Coalition for Change Government has described concerns raised by the Opposition over the revocation of Bingtang Borneo’s mining lease for Rennell-Bellona Province as “naive”.

A statement from the Office of the Prime Minister and Cabinet today says the Opposition should understand that the decision to issue a mining lease to Bingtang Borneo for Rennell-Bellona Province, was made by the Minister for Mines and Energy of the last government during its caretaker mode.

It says what the Opposition has raised shows little understanding about decision-making at the political government level.

The statement said whenever a new government takes office, it has the right to review the decisions made by the previous government to see if they are appropriate and falls in line with its policy direction.

It says any inappropriate and contrary decisions will be revoked at the discretion of the new government.

Meanwhile the government statement said in this case, the decision by the then Caretaker Minister to award a mining lease to Bintang Borneo on 9 September last year, without the Mineral Board’s deliberation and approval effectively means that the mining lease was null and void.

This position by the Mines and Minerals Board on the invalidity of the mining lease was readily conveyed to Bintang Borneo by the Director of Mines, with clear instructions to the company to remove all its machines and equipment from the site.

The statement said the decision by the Minister for Mines and Energy, Hon. Samson Maneka to revoke Bingtang Borneo’s mining lease was made after being briefed by his ministry officials on the position of the Mines and Minerals Board.

It said upon the withdrawal of the mining lease, the Minister has directed his Permanent Secretary to work on a Cabinet Paper to enlighten the DCC Government on the issue of the prospecting boundary overlap, to decide the best way forward. 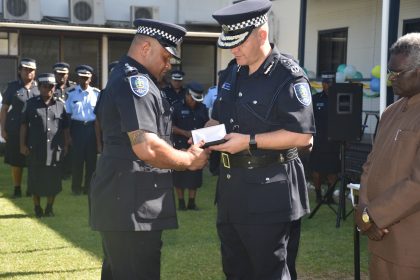 A map of Malaita Province. Photo credit: SIBC. A Malaita man has said while he acknowledged criticisms from the Parliamentary Opposition and the public on ... Read More

A sticker used by the SIEC on every registration centres starting tomorrow. Photo: SIBC A lawyer Mr George Gray says an important issue for the ... Read More