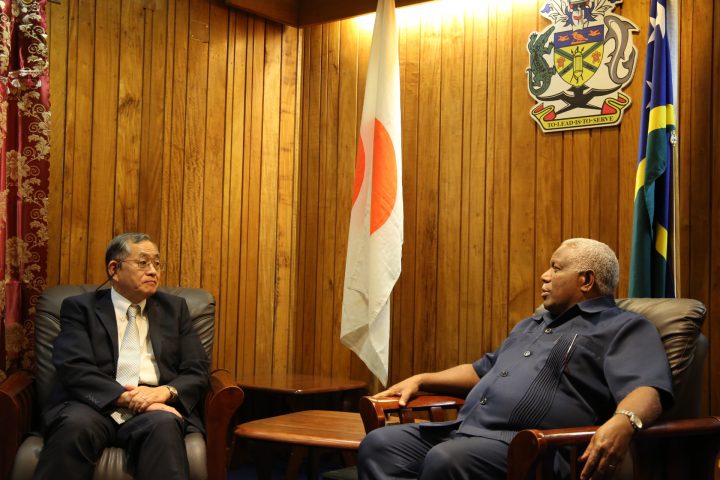 Prime Minister Rick Houenipwela has acknowledged the outgoing Japanese Ambassador, His Excellency Kenichi Kimiya, for his contributions to the Government and people of Solomon Islands.

“Thank you for your time here and the great work you have done during your tenure in the Solomon Islands,” the Prime Minister said during Ambassador Kimiya’s courtesy farewell to him today.

Prime Minister Houenipwela said considerable progress was made while Ambassador Kimiya served in the country over the past four years.

“I am honoured to witness and be part of the current infrastructure development programs in Solomon Islands,” Ambassador Kimiya said.

The ambassador recalled arriving in Solomon Islands to take up his post in April 2014 just days after the flash floods.

Ambassador Kimiya was appointed as the first resident Japanese Ambassador to Solomon Islands after the Japanese Embassy’s status was upgraded from a charge d’affaires to ambassadorial status last year.

Ambassador Kimiya said he is grateful to the people of Solomon Islands for their friendship.

He will return to Japan at the end of the month, and his successor is expected to arrive in Solomon Islands on April 4.

A similar funding signed recently. Photo credit: SIBC. A more than $560,000 grant contract has been signed between the Japanese Embassy and Afufu Community High ... Read More

Japanese flag. Photo: Photo dictionary. A primary school in remote South Guadalcanal has received assistance of over $600,000.00 to build a two-storey classroom building for ... Read More