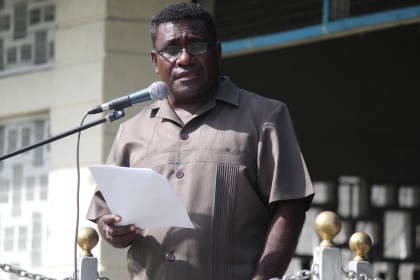 PM Lilo addresses the Police at the Rove Grounds during his visit to RSIPF Headquarters on Tuesday. Photo: Courtesy of Government Communications Unit

Gordon Darcy Lilo made the remarks during his 2014 Official visit to the Rove Police Headquarters in Honiara yesterday.

The Prime Minister said the police service to the nation in the past months was commendable as the force begins to shoulder more responsibilities, even before the RAMSI transition some six months ago.

He however cautioned that the force will be expected to assume more responsibilities as the country continues to wheel towards 2017 when RAMSI will eventually leave the country.

Mr Lilo also said the police play a crucial role in ensuring there is law and order in any country because without good law and order, economic development is jeopardized and investors will be reluctant to come.

Meanwhile Prime Minister Gordon Darcy Lilo said he is happy to learn that the Framework for the Royal Solomon Islands Police Force for 2014 to 2016, has placed more emphasizes on achieving the effort to improve law and order.

The Prime Minister said the Police has stood a lot of tests in recent years and continued to demonstrate that through their work which is evident in the peacefulness of Solomon Islands.

Prime Minister Lilo also encouraged members of the force to uphold their duty professionally for the good of the nation.

Mr Lilo encouraged police officers to remain loyal to their duties and show the same commitment displayed in the past and apply the law fairly.