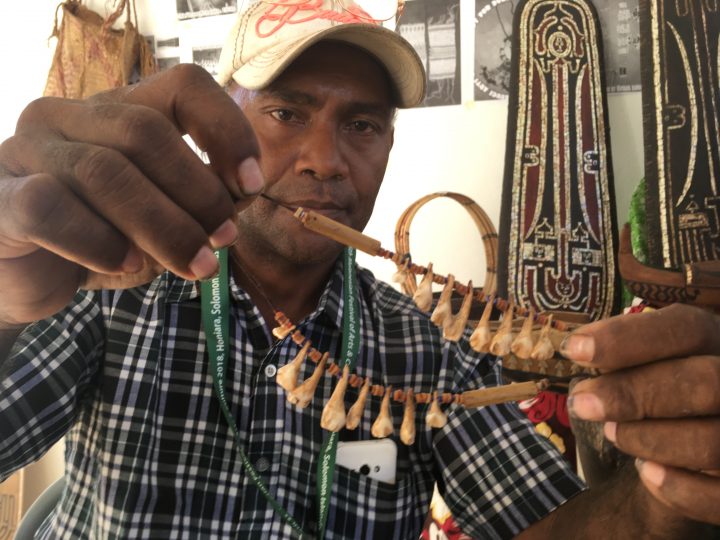 It’s not every day you see someone working around with a ‘Human teeth’ necklace ord earrings, but centuries ago this was a common sight in Malaita province.

Meet Michael Kaura of Bita’ama in North Malaita, who has spent the last 20 years trying to revive the art of ‘ornament crafting’ in Malaita province, and traveled to Honiara for the Melanesian Arts and cultural  festival to showcase his ornaments.

One particular necklace that caught the attention of the public who were visited his stall was the ‘Ae’au lifo’ necklace,  an ear ornament made from human teeth.

Mr Kaura said the teeth belonged to the the skulls of his ancestors who were killed during the headhunting days , and had remained in a cave near his village in Bita’ama.

He said one of the original human teeth ornament was taken to Scotland decades ago, and was displayed at a museum, which he said he tried to return to his people but was unsuccessful.

“I made this ear ornament last year, because I have to keep this tradition alive,” he said.

“I got these teeth from a cave where our ancestors used to keep the skulls of their enemies.” 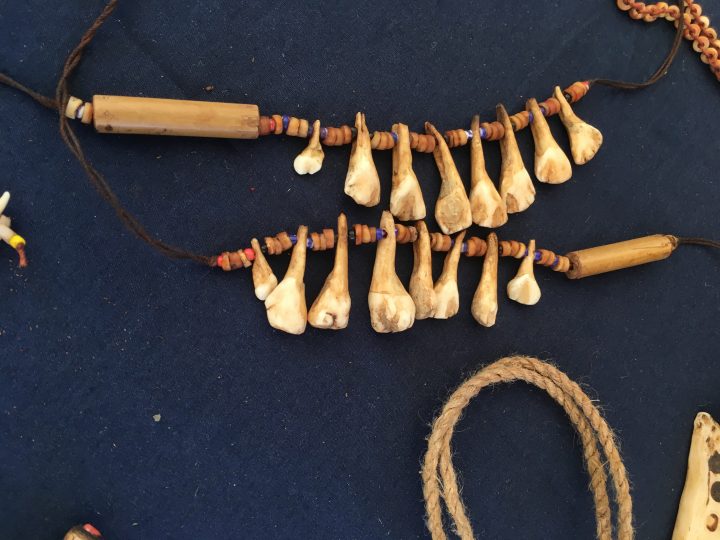 Mr Kaura said centuries, people in Malaita used to wear human teeth as jewelry , and show them off as trophies as to how many enemies they had killed.

He said the people used to make human teeth to decorate their waists, ears , and necklaces.

“The art is mainly practiced in Kwaio, Are’Are, and North Malaita.”

Mr Kaura said the practice of making ornaments and crafts is slowing dying in Malaita , similar in other parts of the country.

He said the MACFEST festival offered a perfect avenue for people like him to preserve their dying culture, and revive old practices.

“Today, I am one of the few people in my area who knows how to make these necklaces, most young people are interested in this practice,” he said.

“I’m planning on building a local museum in my village to preserve and revive this practice, because I think this is our identity and this is valuable.”

The MACFEST festival is currently underway in Honiara, and now in its third day.

The festival will coincide with the country’s 40th Independence anniversary this week, and will conclude on the 10th of this month.