PUBLIC REASSURED OF PLANS TO HAVE PROFESSIONAL POLICE 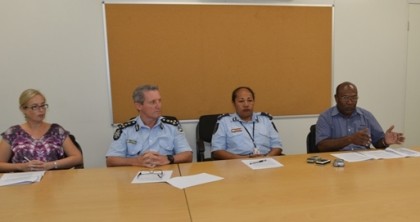 The Ministry of Police and National Security has reassured the public of its plan to develop the Royal Solomon Islands Police Force into a professional police force.

The statement comes after the current public fears surrounding the proposed limited rearmament of the Royal Solomon Islands Police Force.

But speaking to journalists at a Limited Rearmament Media Conference today, Permanent Secretary for the Police Edmond Sikua said all members of RSIPF are expected to be professional and disciplined in carrying out their duties.

Meanwhile, the Acting Police Commissioner Juanita Matanga has also made reassurances of the force’s discipline, saying the RSIPF has been transforming over the years.

“Because I believe that when police officers join the force they took an oath, which clearly outlines the community’s expectations on them. And I want us to understand that the force is professional and that let us not consider them as individual groups”.

Yandina. Photo credit: travelingluck.com Parents of Yandina community in Central Islands Province have raised their concern about their youths currently involving in criminal activities. This is worrying ... Read More