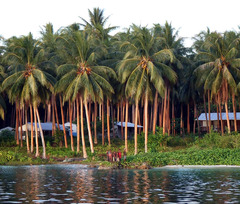 General Manager of the Russell Islands Plantation Limited (RIPEL) has denied he is living in the country illegally.

John Whiteside was responding to recent media reports from non-striking employees of RIPEL that his work permit has expired and calling on the Government to deport him.

Mr Whiteside told SIBC News he has applied for a work and resident permit since 2013 and is still waiting for a response from the Immigration authorities.

He says the issue of his deportation is a matter currently before the High Court when there was a failed attempt to deport him last year and until there is an outcome, he is a legal migrant.

Mr Whiteside also clarified even without a work permit, he remains the General Manager of RIPEL, as appointed by the Board of Directors.

“Some people are of the believe that because I do not have a work permit I’m not allowed to be the General Manager, what I’d like to say is that RIPEL is a private company, it’s governed by its Board of Directors, it’s not governed by the government or any other body or former non-striking workers or anybody else. The Board of Directors is the ones who have the ultimate authority in RIPEL. As far as RIPEL is the concern I am the General Manager of RIPEL, I am authorised to act in that capacity.”

Meanwhile, Mr Whiteside claims that some of the non-striking workers making allegations against him are involved in criminal activities in the plantation.

He says he has evidence and witnesses they stole and shipped copra from Pepesale Estate to Honiara to be sold in May this year.

Two of the workers have been terminated.

The RIPEL General Manager said they reported the matter to the Police, but no action has been taken since.