A number of school teachers that are serving under the Central Islands Province Education Authority have been identified for allegedly scanning and forging qualifications certificates with other references for their 2022 teachers’ posting. 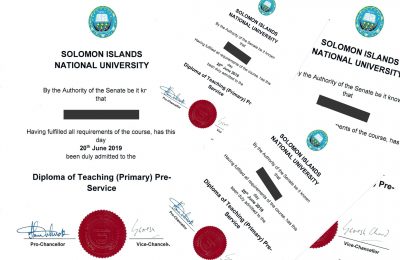 SINU Diploma in Teaching certificate. Similar ones like this are forged.

Reports reaching SIBC News and Current Affairs says, four primary school teachers from South Ngella have been identified for allegedly submitted fake certificates to the authority while the remaining ones were from other parts of Ngella Constituency.

Savo/Russells Constituency and Sandfly/Buene Vista Ward are also currently under investigation as there are no report of such issue to-date.

The report alleged, the teachers used certificates of others who have already graduated from the Solomon Islands National University (SINU).
They forged the copies and with their names on it and then re-printed and attached the fake documents in their submission to the Central Provincial Education Authority Office.

She said, they found that these teachers still have a big amount of outstanding tuition fees from SINU and are yet to graduate.

Mrs. Tovongo says, SINU’s Students Academic Service (SAS) Office has also confirmed the identified teachers who allegedly forged the certificates have their certificates held as they still have outstanding fees with the university.

She said, these teachers continue to withdraw their salaries which is an offence in the education sector of the country. She adds, who ever is committing the offence will likely to have difficulty in finding job opportunities in all work places.

The CIP Education Inspector confirmed that investigation into the matter is continuing and they will thoroughly be looking at documents submitted by applicants to ensure applicants are honest with their submission.