SOLUTIONS SHOULD BE MORE THAN WORKSHOPS: ANIRI TOLD NEW MPs 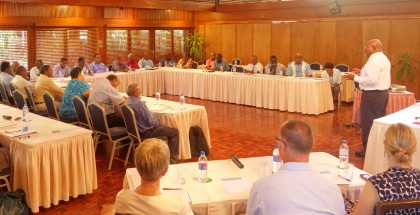 A Honiara man is calling on new Members of Parliament who will be determined by the elections next month to focus more on solutions than workshops.

Justin Aniri told SIBC News enough workshops have been held on identifying the country’s problems but there were less on finding
objective and constructive solutions to the problems.

He says a lot of workshops have been held on Climate Change, the Economy and other areas crucial to the well being of the nation, but little focus is given to constructive solutions to these issues.

He says enough knowledge has also been disseminated through these workshops.

Mr Aniri also says any new Member of Parliament should focus more on developing the provinces than centralizing all development activities in Honiara.

He adds, the Honiara City Council should be empowered to govern Honiara, and more governance and development attention be turned to the provinces.

NESU YET TO RELEASE ALL 2015 EXAM RESULTS

The Homepage of the MEHRD website on display. Photo credit: GCU. The National Examination Standard Unit (NESU) is yet to release the transition rate for ... Read More

Danger of Electric Shock. Photo credit: logo-kid.com. A body, believed to be of a young male, has been found under an SIEA electrical post at ... Read More

NEWER POSTP.B.M.P BACK IN HONIARA AGAIN
OLDER POSTCHESS LEAGUE KICKS OFF IN HONIARA