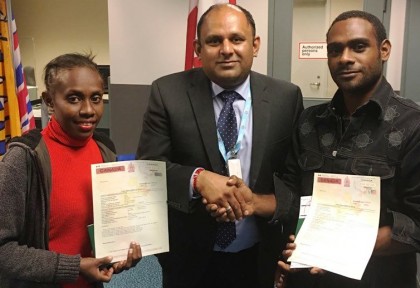 Canadian officials have praised the partnership calling it a success and a right step in the area of Human Resource Development that will grow in months and years to come and help boost foreign remittances into Solomon Islands economy.

The Canadian Governments Immigration Division granted the two successful GP Workers with work permits allowing them to be employed in Canada for a 4 month period.

They have also been issued with a Social Insurance Number (SIN) and a Medical Service Plan card (MSP).

Amelia Muse and Careka Volly were selected as successful candidates of the Canadian employment partnership between the Canadian Tourism Sector Council and Guadalcanal Province last year.

CITREC Canada Chairman Ashwant Dwivedi who was accompanied by Canadian Immigration and Border officials in receiving the two workers said that he was pleased with the progress.

In May this year, Premier Veke met with Canadian employers asking employers to hire ‘CITREC Job Ready’ graduates for the Canadian job market.

Meanwhile, Amelia said she cannot wait to start the work and make some money together with learning the Canadian ways of working in the kitchen.