Jared KoliApril 23, 2022 8:32 am
The USA has warned that Washington would have “significant concerns and respond accordingly” to any steps to establish a permanent Chinese military presence in Solomon Islands. 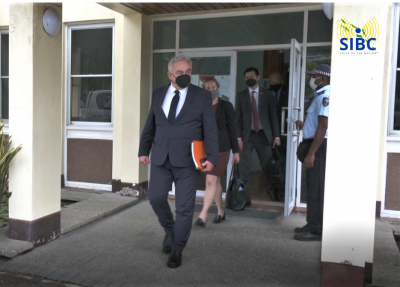 US Indo-Pacific coordinator Kurt Campbell and his delegation walked out from the Prime Minister’s office after their lengthy discussion yesterday afternoon. 𝘗𝘩𝘰𝘵𝘰: 𝘑𝘢𝘳𝘦𝘥 𝘒𝘰𝘭𝘪

The White House has issued a statement after the delegation, led by US Indo-Pacific coordinator Dr Kurt Campbell met with Prime Minister Sogavare and his cabinet members, just days after the country signed a security pact with China.
“If steps are taken to establish a de facto permanent military presence, power-projection capabilities, or a military installation, the delegation noted that the United States would then have significant concerns and respond accordingly,” it says.
The United States emphasized that it will follow developments closely in consultation with regional partners.
The statement adds, the U.S. delegation outlined specific steps Washington would take to advance the welfare of the people of the Solomons, including by expediting the opening of an embassy there, boosting cooperation on unexploded ordinance and sending the Mercy hospital ship to address health issues.
It said Washington would also deliver more vaccines and would advance climate and health initiatives.
It said the two sides had “substantial discussion” on the security agreement with China.
The statement said Prime Minister Sogavare reiterated to the visiting delegation that there would be no military base, no long-term presence, and no power projection capability under a security deal signed with China.
The US delegation also met with the Opposition Leader after the meeting with Prime Minister Sogavare yesterday. The Opposition Group in a statement today, said the Government should seriously heed US advice not to cross the redline.
Opposition Leader Matthew Wale acknowledged the message communicated to him during the meeting with Dr. Kurt Campbell and delegation.

Wale said he informed Dr. Campbell that a new government would terminate the deal, as it is opposed by the vast majority of Solomon Islanders.

The national government is yet to release a statement on the meeting with the visiting US delegation.