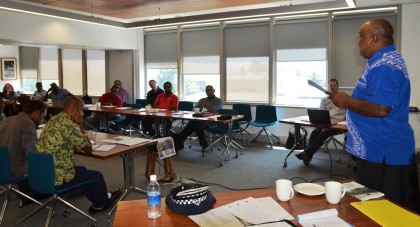 The Solomon Islands Government most senior official responsible for the draw down of the Regional Assistance Mission to Solomon Islands (RAMSI) was very optimistic that the country will be safe and secure when the Mission concludes in June 2017.

Mr. Wasi explains, RAMSI had completed its mission and SIG is ready to resume full responsibility for the nation’s security.

He says the Government is ready but as RAMSI prepares for its departure in June 2017, Solomon Islanders must know that we are all responsible for the security of our country.

Meanwhile, the special envoy emphasised every Solomon Islander must support the work of the Royal Solomon Islands Police Force (RSIPF) in maintaining law and order in our communities.

Mr. Wasi adds, in its preparations for RAMSI’s departure, the Government had increased its budget allocation for the RSIPF by nearly 20 per cent in the 2016 budget and Cabinet has endorsed the RSIPF Crime Prevention Strategy, the True Cost of Policing Report and the Capability Plan.

He says the Government begins consultations on future bilateral policing programs with Australia and New Zealand that will follow RAMSI.

Mr. Wasi said during the final 11 months of RAMSI’s mission, the Government and RAMSI officials will embark on a community outreach program throughout Solomon Islands to explain the final elements of the Mission’s draw down and Government preparations for RAMSI’s departure.