WREATH LAYING AT “PRIDE OF OUR NATION” MONUMENT TODAY 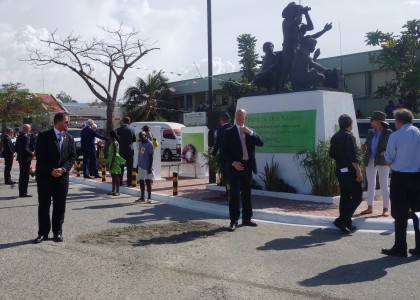 The Pride of the Nation monument during Secretary of State’s visit. Photo credit: SIBC.

A wreath laying service will take place at the “Pride of Our Nation” Monument, Commonwealth street, coming Tuesday.

The Solomon Scouts and Coastwatchers Trust Board today told SIBC News, November 11 marks the day the first world war was officially ceased and is commemorated in the United States as Veterans Day.

It stated, many commonwealth countries have sent troops to serve in this war adding, it is fitting that the “Pride of Our Nation” Monument is the venue for this remembrance to honour soldiers that sacrificed their lives.

Members of the public are welcome to attend the service which starts around 8.30 am this morning.

War flag of the Imperial Japanese Army. Photo credit: Wikipedia. The Japanese Community in Honiara will mark the end of the Second World War with ... Read More